In December 2013 we held a bunch of weekly weekend-challenge events, which was fun, and generated posts that made it to the site's newsletter, week after week. One may want to tweak this query so as to filter posts created before December 30th, 2013.

Some weekend-challenge stats up to that date:

Let's reboot the thing. But differently.

Why? For the heck of it.

When? Between Saturday 2014-02-01 and Friday 2014-02-28, inclusively. Because it's no longer a weekend-only thing, the weekend-challenge tag is being replaced with community-challenge.

Who? Everyone that thinks they can implement the challenge with the best code they can write.

What? We have less than 2 days to decide.

We shall re-conduct this event later (with a different challenge of course!), if a post-mortem analysis shows that this activity has contributed to bring up the site's metrics. The December stats show 1.67 answers per question - that isn't enough. We need at least 2 answers per question, and of course decent voting. 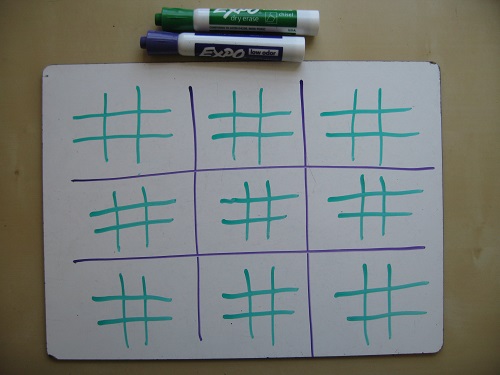 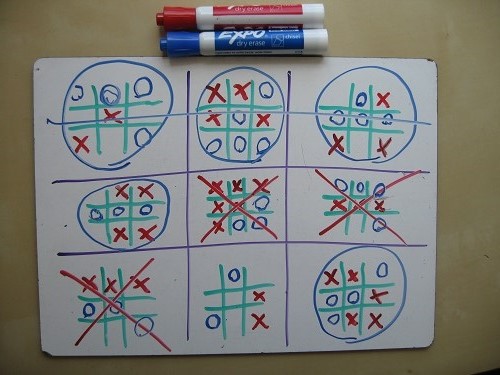 You don’t get to pick which of the nine boards to play on. That’s determined by your opponent’s previous move. Whichever square he picks, that’s the board you must play in next. (And whichever square you pick will determine which board he plays on next.)

What if my opponent sends me to a board that’s already been won? In that case, congratulations – you get to go anywhere you like, on any of the other boards. (This means you should avoid sending your opponent to an already-won board!)

What if one of the small boards results in a tie? I recommend that the board counts for neither X nor O. But, if you feel like a crazy variant, you could agree before the game to count a tied board for both X and O.

Implement a game that works as described above. Make it a console app, a windows app, a calculator app, a web app, save games and high scores on a cloud, do what you will.

Please tag entries with community-challenge and game, as well as any other applicable tag(s); also include a link to this post: http://meta.codereview.stackexchange.com/a/1472/23788.

@ChrisW raises an interesting possibility that there is IO, and a 'winning design'.

This made me think:

If there is a full month for the challenge, maybe an interesting idea would be to define a socket-layer interface and protocol, and then you can connect two solutions to each other and they can compete against each other.... i.e. negotiate who's X, who's O, and then each AI alternate in sending 'moves'

This could maybe be an extension (I don't know how easy it would be for a TI-Socket layer).

I suggest doing the UTT challenge in two parts:

I suggest the following requirements for the first stage, the design of the game's I/O:

Essentially, the first challenge is to specify the program's I/O, i.e. its interface to the outside word and users.

If you believe in Test Driven Development, it should be possible to write one or more bots which use the I/O to play the game, before the game itself is written to implement that I/O.

Expected answers will define/specify the I/O and/or UI. They should be clear enough that bots can be written using that specification and will then interoperate with game implementations.

Given that we are allowed (by the rules of the OP) to post our complete solution in stages, you are welcome to accept or ignore the proposal in this answer, to implement and review the I/O before you implement the rest of the game.