Stack Overflow for Teams is moving to its own domain! When the migration is complete, you will access your Teams at stackoverflowteams.com, and they will no longer appear in the left sidebar on stackoverflow.com.

Check your email for updates.

I've contacted SE yesterday to burninate a few tags. Something apparently went wrong, causing these tags to "recreate themselves" and appear as new, with a few questions left over. One of these questions only had these tags (automatically giving it untagged), and I've fixed that by giving it a legitimate one.

Okay, no problem; the tags can just be burninated manually now. I've completed that with one tag so far, and it has successfully been burninated at the appropriate SE time.

However, the untagged tag has also appeared on the tag list as new. Although it no longer had any visible questions for it, it didn't go away at the appropriate SE time. If it were treated as a regular tag, it would've succeeded. But it's also supposed to be a system tag, not visible on the tag list. 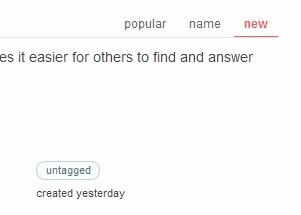 But then I decided to see if I can tag another question with this tag, just to see if it can still be used. And when I attempted to add it...

...it shows that there's still a question tagged with it, which explains why it wasn't burninated. But, this "invisible" question is not on the list, so I cannot remove it myself.

Is this something that will clear up automatically, or does something else have to be done? Someone can easily use this tag, and it shouldn't be allowed as it's only to be used by the system. I also believe this tag is blacklisted network-wide for this very reason.

The “Recent Hot Answers” list for that tag links to this question: https://codereview.stackexchange.com/q/97/2041, which does have the untagged tag, but it is also locked. I guess that's why it doesn't appear in the normal list of questions.

4
Should there be some obligatory tags on questions?
23
Should we do something about our meta tags?
10
Is it time for [design] to finally resign?
2
Do we really need to discuss every new tag?
3
Tag for code that executes in the interface builder
3
Should the [jquery-mobile] tag be populated with existing questions?
8
Tagging categories - Which are most useful?
2
What's the Code Review guideline for tags and where can I find it?
1
Let's demerge [mergesort] for consistency with other sorting tags