Since mid-November 2013, a number of things have happened: 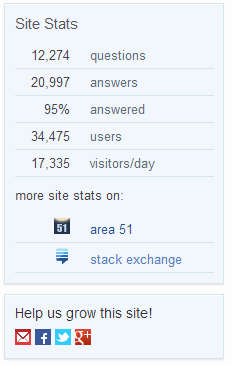 Let's take Stack Overflow as a reference for activity: 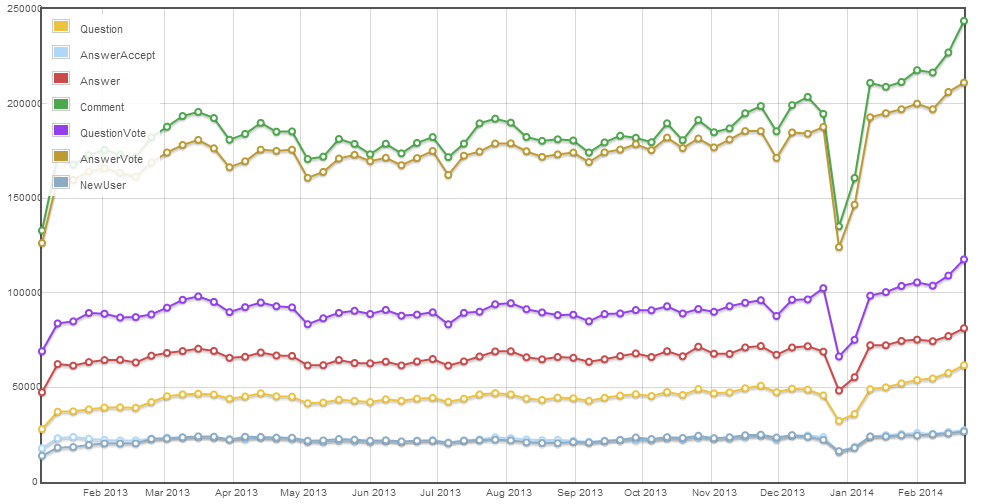 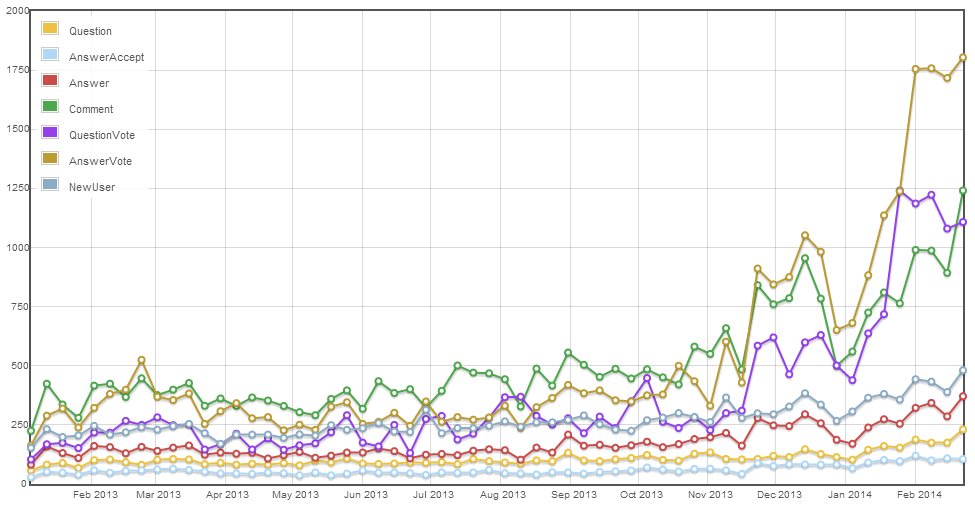 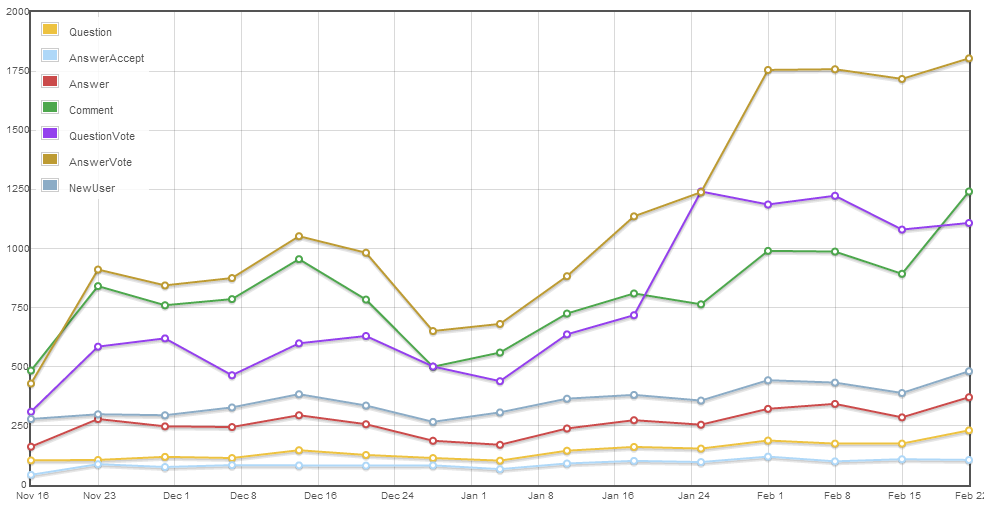 One of the key points of our review was the voting issues:

Voting is an odd beast here. When we reviewed the site, the front page had a dearth of voting. Even looking now, in the last 100 questions asked and the last 100 answers posted, less than 10 of each have scores past 3 with several negatively rated. Now, there are users who vote - vote a lot in fact, as most of the top users have hundreds of votes under their belts (with decent downvote rates as well). But in spite of this, there’s still a humongous bed of users sitting in the ~100-200 reputation range and not actually in the major privilege levels. So for where-ever all the votes are going, it ain’t accumulating.

At the time of this writing, the last 100 questions asked on SEDE have these scores:

I realize this is out-of-sync, ..but we're definitely in another ball park. Let's look at reputation scores. 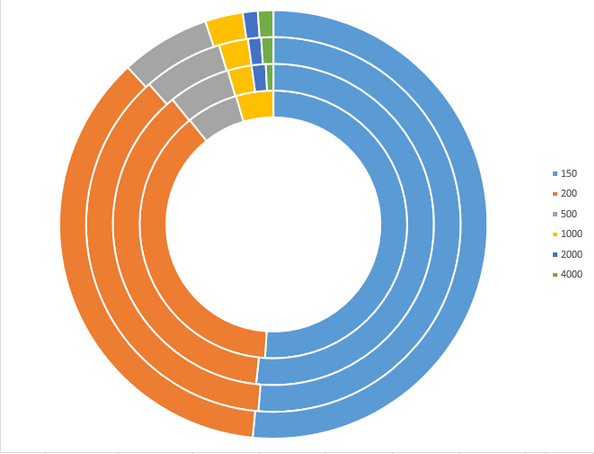 In mid-November, the average time for a question to receive its first answer was somewhere between 8 and 10 hours.

Following the CodeReview Zombie meme, if you divide the answers on CodeReview in to two groups:

The second group are a loose definition of Zombie Kills. There are two sides to our progress...

This graph shows the activity in these two areas, : 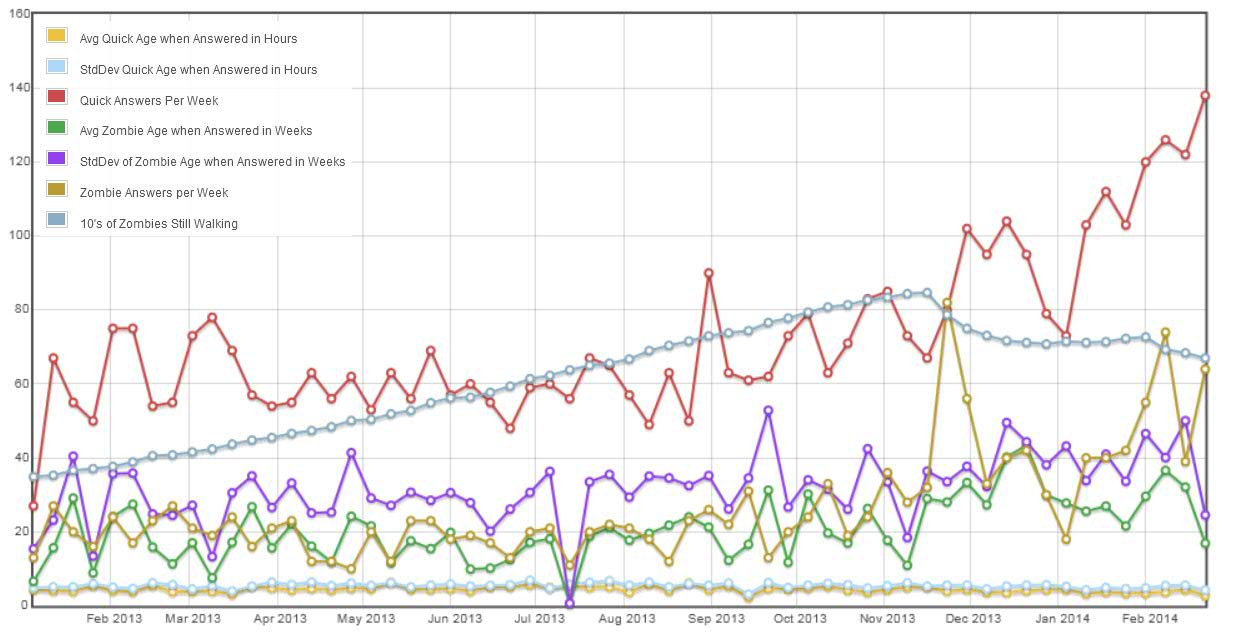 It shows the nice red line, which is the number of questions per week that get answered within a day.

The 10's of zombies is the curve that shows the steady increase in unanswered questions, until mid November, when the zombie-cull commenced.

These two metrics clearly show how the zombies are being brought back under control, while still maintaining quality answers in good time for the new questions coming in.

Are we there, yet?

A lot of progress has been made, but we're not there, yet.

In the one month since we've had access to the data, we've barely made a dent in the distribution of avid users among reputation tiers (the "Grace Note query").

There is still a massive backlog of users who are still suffering from the historical effects of low voter participation. Even with the recent voting campaign, we seem to be promoting as many users into the ≥ 150-point tier as we are graduating into the upper tiers.

We're excited to have increased the ranks of our ≥ 10k users to six members. While we're focused on that figure, though, keep in mind that under the standard point scale for graduated sites, 10k points only grants access to moderator tools. It takes 15k points to be able to protect questions, and 20k points to be a full trusted user. (We're getting extremely close to having our first 20k user!)

Despite the effort to increase voting, I'm afraid that much of the voting is done by a dedicated group of supporters. Before we say that we're there, I'd like to see evidence of deep cultural change in voting patterns. (There's probably a Data Explorer query coming up to track the voting patterns!)

Another noteworthy event was Best of Code Review 2013. Over the course of two weeks, the Code Review community found some great questions and answers that illustrate the benefits of this site. Hopefully it will become an annual tradition.

88
What's a Zombie? And what are the many other memes of Code Review?
35
Stack Exchange Data Explorer is up. What now, Wonderland?
19
Best of Code Review 2013
48
How is Code Review doing right now?
54
Call of Duty - We're on a mission
42
Once upon a time in Stackland

13
Trying to get this website get out of beta
25
1000 days in beta: let's make CR t-shirts
48
How is Code Review doing right now?
54
Call of Duty - We're on a mission
14
So this is Christmas, and what have we done?
19
Best of Code Review 2013
12
So votes are good for us. How can I find answers/reviews to vote for?
42
Once upon a time in Stackland
9
(Follow-up) Possible Solution for Zombies : The Brainstorm