He came across a miraculous star named CodeReview
in the deepest depths of the internet.
He (maybe) read the rules of the planet, and then unboarded from his
spaceship to ask a question: Namespacing jQuery into markup I don't control

But the inhabitants of the planet were hostile towards his question,
And so, the first flamewars in the history of CodeReview began.

I took the liberty to create a conversation with the exact same title from the transcript of our chat, where the reactions of the "avid users" and some comments are captured.

Now to the point.

What went wrong? Where can we do better? How can we ensure such a Flamewar does not happen again?

Note: In order to facilitate a better 'process' when these things happen, it is, on the balance of things, appropriate to show the deleted comments. If this discussion starts to 'reignite' the debate, or loses its 'constructive' and 'positive' slant, then this entire question will be removed.

As a meta-discussion on the flame-war, it seems appropriate to include deleted comments that are not visible to regular users. 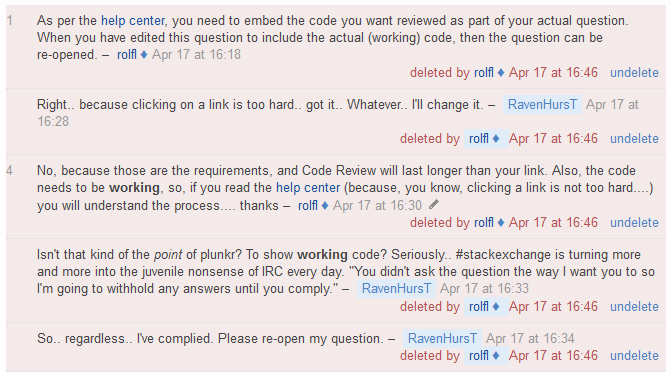 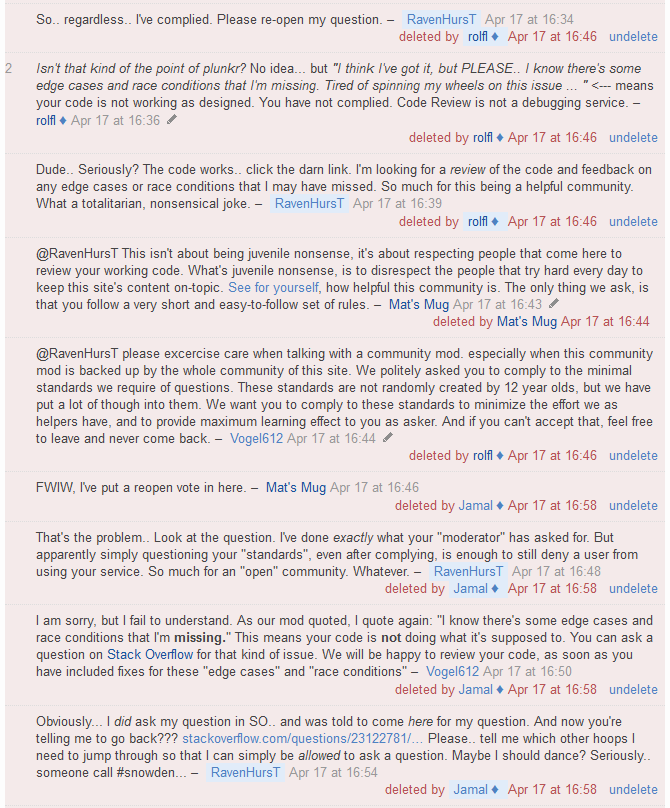 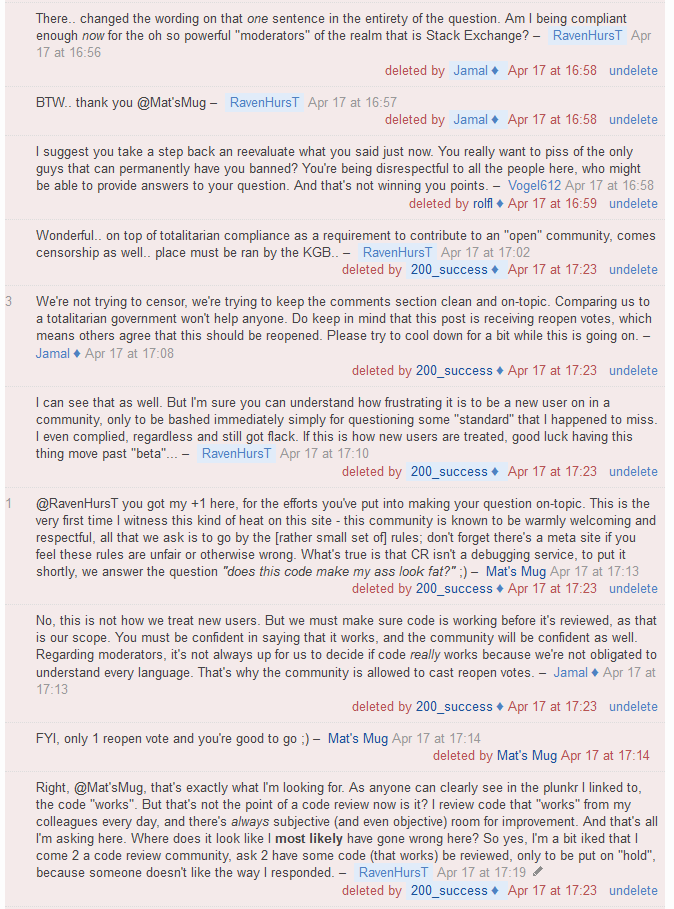 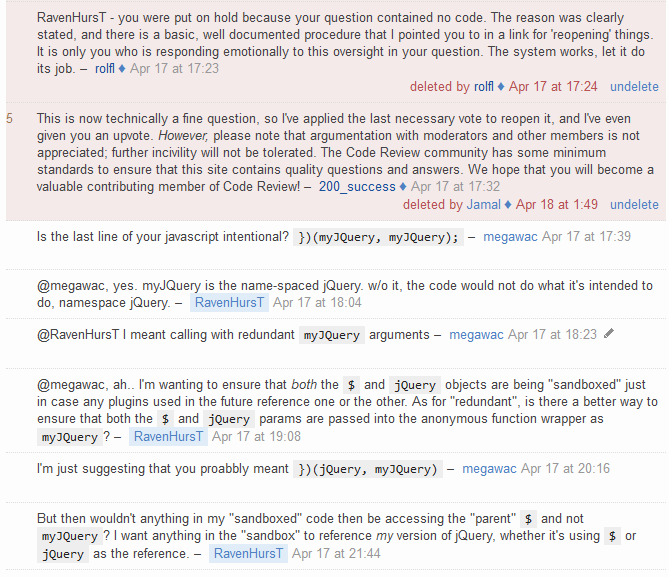 I was not a part of this, so this answer is based only on what the OP has shown us. I am afraid that I may catch a lot of flak for this post, but here is how I see things.

Let's go from the beginning:

Let's stop right there for a second and let's look at @rolfl's response:

While this is a clever response, hence the 4 upvotes, it is unprofessional and immature. I can accept a normal poster being immature about something, but it is unacceptable for a moderator to act like this. Such a response will only throw the OP on the defensive.

Please note that this is not meant to be a personal attack on @rolfl. I am in no way questioning his or anyone else's ability to moderate. I simply believe a mistake was made and it had dire consequences.

I believe a better response would have been something along the lines of:

If you have any questions or concerns about the rules listed in the help center, feel free to post a question on our meta.

I feel this issue was a simple misunderstanding. Based on @RavenHursT's comments, the code worked to the best of his knowledge, therefore it was on-topic.

...I'm looking for a review of the code and feedback on any edge cases or race conditions I may have missed.

While this was a minor issue, it's not hard to see why this one, compounded with the previous issue, would turn into a huge frustration for @RavenHursT.

@RavenHursT was immature.
Moderators stooped to his level.
Some community veterans backed the moderators.
Unnecessary back and forth replies ensued.
@RavenHursT probably felt like he was being ganged up on and was generally frustrated.

Overall, this was not a good experience for a new user and that is a failure on our part.

Final: What should have been done?

This post isn't meant to defend @RavenHursT. The way he acted was also unacceptable, but I believe this could have been avoided.

Overall, we should take this as a learning experience and strive to handle the situation better in the future.

The Elephant in the Room

I did ask my question in SO.. and was told to come here for my question. And now you're telling me to go back????

This problem really needs its own topic, but I think we need to face the facts. The scope of Code Review is ambiguous and counter-intuitive. This isn't something I'm going to discuss in this topic though.

I have something to add concerning the "not working" code: we hardly know whether our code is 100% safe or not, and often assume ("know") that some corners cases remain and even if we wrote the best possible code we could, there would still be some obscure errors which would generally not trigger but which could trigger someday. We often feel that there are errors left, but we can't see them and all the unit tests pass successfully.

In my opinion, it is also the aim of Code Review to catch these corner cases, otherwise this question would be seriously off-topic since there are data races (I knew that there would be some threading issues, but couldn't spot them, and they didn't trigger errors on my computer). Look, I even stated right in the question:

I was pretty sure that I would get some problems due to parallelism, but for some reason, it seems to work. I got the expected results in the right order. Just to be sure, I would like to know whether my program is or correct or whether it has some threading issues that I couldn't see.

Therefore, still in my opinion, once the code had been properly included, @RavenHursT question was totally on-topic and should have been reopened without further discussion.

I'm writing this answer from a working mindset at my job, I appreciate this isnt your job and you probably do not need to remain 100% professional for your own livelihood.

I don't think you can ever stop a flamer from flaming, this being said he clearly had a problem with the rules of the site which wasn't helped by the way he was responded to.

I think you handled it correctly by handing him the rules and giving him reason as to why these rules exist "code review will last longer than your link" is a perfectly good response as it is a valid reason.

The only thing I could say is the amount of digs (mainly about clicking a link) in responses was not required, you are only playing his own game when you respond in that matter. Remaining professional when linking the correct information and rules is really important because it provides reasoning and trust.

No offense intended to anyone, I deal with heated people all day at work and the best response is to be as nice as possible. They have nothing to argue about then and if they continue to do so, they clearly don't want any help.

My take on what happened:

My take on how to prevent it happening:

The obligatory answer, which is the somewhat documented process:

Unfortunately I wasn't a part of this, I wish I could have been there to help. I'll make a small note here though: tone is everything. Whenever you are writing something to be read, the it is up to the reader to decide how you will "sound" in their head.

At first I think we handled ourselves pretty well as a community. We (for the most part) were pretty polite while being instructional to the OP on what he could do to have their question re-opened. But we failed to respond to the OP properly when they came back with a sarcastic and disrespectful attitude.

You can't feed a flame. If the OP fails to read through the helpful comments given to them (and on top of that, responds in an ill-mannered way), and then act accordingly (in this case, going into the Help Center and reading what questions are considered on-topic), there isn't much else you can do. You can only do so much for the OP. At some point, you are going to have to leave them alone and let them fix the problem themselves.

Not the answer you're looking for? Browse other questions tagged discussion specific-question vote-to-close comments new-users .

4
New user's question closed without explanation
9
Guidelines for new users + proposal tag
2
Add notice to FAQ for (new) users
136
For an iterative review, is it okay to edit my own question to include revised code?
8
Do new CR users who are trusted elsewhere on SE go through the First Post Queue?
28
New answers on old questions using new language features
7
Help a new user avoid being off-topic
4
Announcement: New chat room CRCQR
4
How can I comment on or ask a question about a post edit?
2
Improving a question - when to post a new question