Clarification on how to use generic code snippets?

I recently posted a question in which I purposely only included a specific code snippet: Purposely raising exceptions to use catch

In my original (unedited) question, it had a simple example of actual code that I'm using, with the method names and specific exceptions removed. The intent was to keep my question simple so my question is addressed appropriately). "Best practice" types of questions are not generally acceptable for Stack Overflow, hence why I posted it in Code Review.

I've read this site's rules and it does little to clarify the requirements around this type of scenario. If generic best practices don't belong in this site at all, why are specific best practices acceptable? That just allows duplicate questions to be asked with slightly different requirements.

I decided to downvote your question instead of casting a close vote, because of the relatively new consensus about narrowed-down questions, to which I don't agree.

So I let your question go, with a downvote. After 2 days there still hadn't been a single close vote on it, so seeing that it had been edited, I retracted my downvote and decided to play the game and review your code - because that's what CR answers are supposed to be: peer reviews.

This is the accepted answer (7 upvotes, 0 down):

Using exception handling for flow control is discouraged by Microsoft.

And a round table on the topic is available.

That being said, C# supports doing so, and I suppose it depends on the condition encountered whether an exception is the most appropriate response.

Nowhere near a peer review. It does answer the OP's question though - about whether or not it's ok to throw an exception just to send the execution path into a catch block, i.e. to control execution flow.

The problem is that, in my opinion, this isn't what this site is about.

From our Help Center (emphasis mine):

If the answer to any of these 6 points is no, then CR is not the right place to ask. In my opinion the narrowed-down nature of your question went against the last one; answerers simply cannot address any facet of your code, other than what you've narrowed it down to.

As a result, I deem your question to be more of a high-level design question that's best asked on Programmers.StackExchange, since all you're looking for is a "no, it's not best-practice because xyz" rather than an actual peer review, where answerers can help you come up with cleaner alternatives and point out other flaws in your code, flaws that can affect readability, maintainability, performance, security, etc.

Until a couple of weeks ago, I would have simply cast a close vote and pointed to Programmers.SE in a comment. In spite of recent meta-discussions and seeing that no one else was casting a close vote, I chose to downvote instead.

To me, demonstrates exactly why I should have stuck to my original idea and cast a close vote instead. If you're looking for a "yes/no" answer, CR definitely isn't the right place to ask. Here's a Community Ad that was recently submitted, that does a very good job at explaining what we do: 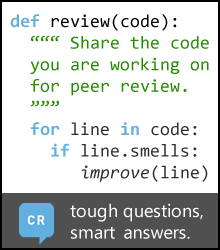 Code Review excels at reviewing every detail of real, working code that is specific to your project. By renaming all of your functions to have generic names, you've turned a concrete question into a conceptual one, of interest to all programmers.

From the Programmers Help Center…

I have therefore migrated the question to Programmers.

The current version of the code is ...

The version which you originally posted said, DoSomethingElse(); instead of return null;.

The original version didn't make sense to me, because I didn't know:

Because it didn't make sense I didn't answer it.

The reason why it didn't make sense is that you altered (i.e. obfuscated) it before you posted it on CR.

That's another reason why code snippets and 'example code' are off-topic: What topics can I ask about here? says,

In summary, you have a specific question about Programming, and you don't want a code review.

Not the answer you're looking for? Browse other questions tagged discussion specific-question .

29
Why is hypothetical example code off-topic for Code Review?

4
Editing your own answer
16
Handling Asker not learning from previous reviews
12
Could incomplete or not-quite-working code be suitable for review?
27
'Canonical' questions to help address common issues
5
Poor mans count, is it off-topic?
7
Need clarification on my close reason interpretation for a specific close reason
3
Answer made on suggested comment, not on initial question
7
Are questions mostly unrelated to the presented code on-topic?