Should we tag Swift questions with the appropriate OS tag as well?

Like should we tag swift questions with the ios or the osx tag as well, or will Apple call their new OS's something else?

Swift can be used to develop for osx, ios, windows, linux, and possibly more platforms, since it is open source. Rather than "forcing" one OS that you develop for, we should leave it to the asker to decide on which OS he decides.

Honestly, I don't see how swift should be considered special here at all. It's certainly not any different from objective-c. And the only thing that perhaps separates these languages from other languages is that when you're writing code in these two languages, you're usually writing for a specific operating system (like you're almost always writing specifically for Windows when you're writing in c# or vb.net) (and unlike say java), but also there are two very common operating systems that are used.

So, a question in java doesn't typically need to specify an operating system, because it is rare that java questions are doing something OS-specific, and when they are doing OS-specific things, it's usually android, and gets tagged with that.

Meanwhile, up until recently, .net was enough to know that you were in the Windows environment. I don't know enough about it to know whether there are any real differences between developing for desktop or Windows phone... but there really aren't that many Windows phone specific questions anyway. When there are though, if there are real differences in development between the systems, an OS-specific tag should be used.

So, how about swift and objective-c (which again, should be treated identically here).

First, let's understand this aspect. Let's take a look at some stats... I'm not claiming these as perfectly accurate. I looked several places and they all report similar sorts of things... look at the popularity of various operating systems based on web traffic. 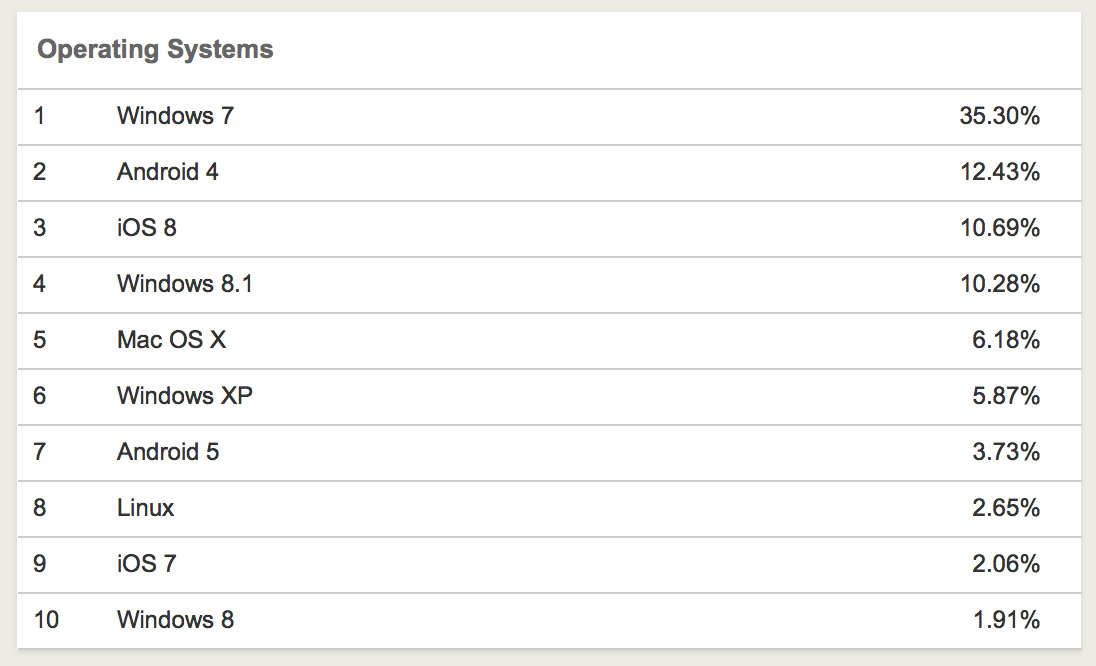 But perhaps most importantly, there are drastic differences between developing between the operating systems.

There are real and distinct differences between the operating systems that warrant the tag to provide the distinction.

Not the answer you're looking for? Browse other questions tagged discussion tags specific-language .

4
Should there be some obligatory tags on questions?
2
What should the [windows] tag be used for?
6
The [untagged] tag has "recreated itself" and is stuck with one "invisible" question
8
What should be Meta's master community challenge tag?
3
Tag for code that executes in the interface builder
6
Should we use the [mathematics] tag for "computer arithmetic"?
3
Should the [jquery-mobile] tag be populated with existing questions?
9
What's the purpose of the .NET tag?
10
I don't think this tag [functions] quite well
13
How to deal with the changes in the Swift programming language?