Once upon a time in Stackland

It's been quite a while since the 100 days later update, which was posted around the 100th day after our last site review, which brings us back in November 2013.

If a baby was conceived back then, that baby is probably born today. I think it's time for another update.

Questions per day has been stable for quite a while, constantly revolving around 30. Time-to-answer has improved: 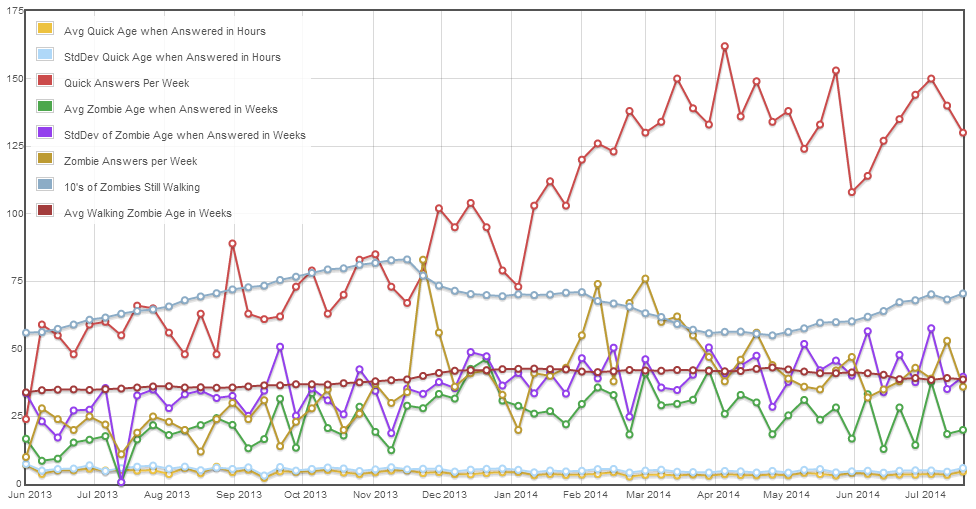 Looking at the top 15 unanswered tags, we can see which tags are pushing the time-to-answer metric upwards: 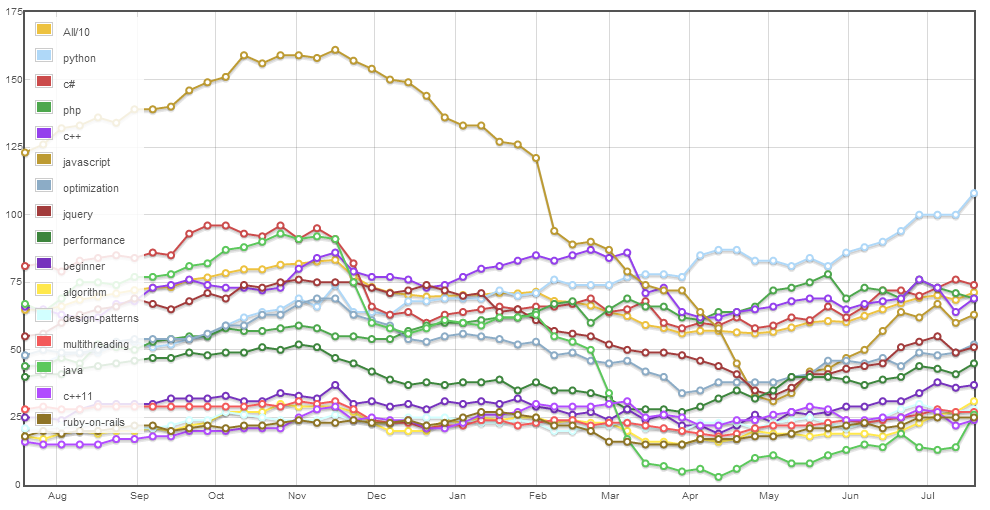 We'll never have enough reviewers. We're keeping up with incoming questions, but with the increased question-asking activity, in order to get the site's Answered% up closer to 100%, we'll need more answering activity overall.

Looks like we do have returning customers after all!

When the race with PCG started in mid-March, we had:

The site's main chatroom has seen a number of new faces - the Talkative badge has been awarded 141 times (Outspoken x 42), and a lot of these users can often be found in The 2nd Monitor. This is great news, because since mid-November our chatroom has been a cradle for a lot of good things; seeing its activity continuously increase can only be a good thing all by itself.

Are we due for another site review? Can we expect a graduation announcement anywhere in 2014? If not, what do we need to do (besides "keep doing what we do") to get there?

I have read most of the unanswered Python questions on Code Review. It appears that there are two major kinds of questions that are not answered:

The problem with optimization is that you have to write benchmarks in order to provide a meaningful answer and people generally don't bother to write benchmarks, and the results may still depend on the platform and not be relevant. The only way to provide meaningful performance advice without benchmarks is to know your algorithms. Some algorithms are pretty tricky and it is not trivial to reduce the complexity of an operation. Therefore, answering such questions is rather hard and many are left unanswered.

We might know Python, know the differences between Python 2 and 3 and which idioms should be used, but non-standard libraries knowledge is no common knowledge shared by all reviewers. Even if we want to learn about the library, there will be some time before we are confident enough to provide a meaningful answer about library-specific questions. One eight of the unanswered Python questions is about django and there are also many questions about numpy (those ones can be even trickier because they often deal with algorithms). I think that I have also seen some questions about sockets and networking.

Therefore, I don't think that Code Review needs more Python generalists, but more people who know about algorithms, networking and about some specific libraries (it would be good to have some Django guru around).

EDIT - 19 August 2014: Also, compared to java and c++, it seems that there aren't that many votes on the python questions on answers. That has often been said, but we need you to vote more, people.

Seriously though, it looks like we should all take some time to look through the unanswered questions and see if we can make out some things from other languages, even if it is just to activate users that asked a single question and then lost faith in Code Review in a time before the Great Revival.

48
How is Code Review doing right now?
29
The race has started. Are you running?
33
100 days later: what's up?
14
I bet you didn't know about this comment by Jeff Atwood on Code Review's viability