I cast a close vote on this question: Simplify expression in Swift playground, or at least that's what is claimed and is preventing me from casting a close vote now. 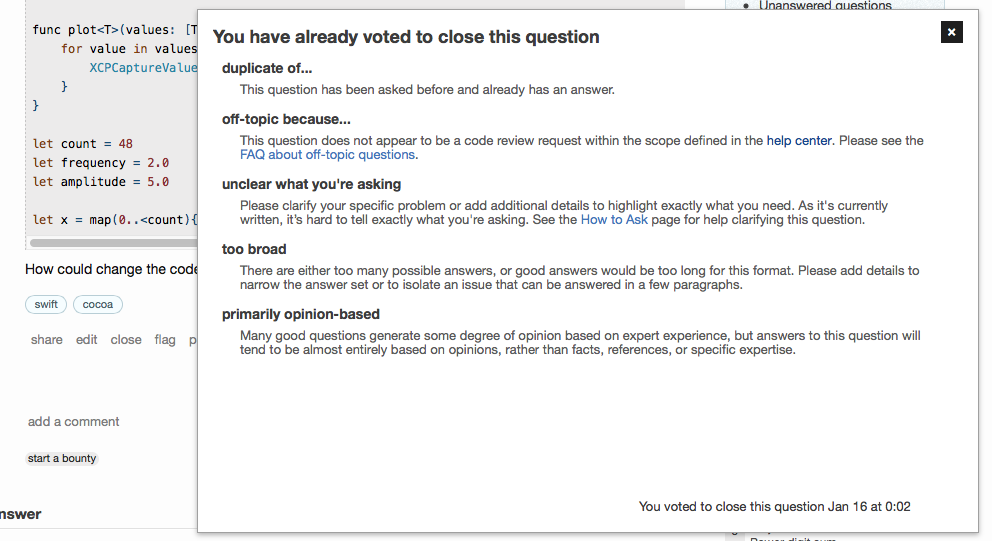 Yet the question appears to have zero close votes cast on it?

So, what's going on here? Why doesn't my close vote show up?

(Whether or not the question needs to be closed might be another meta question, so please don't get off-topic with answers here. This question is strictly about a close vote that's not appearing.)

Close votes expire, and you cannot close-vote twice on the same question.

Not the answer you're looking for? Browse other questions tagged bug status-bydesign vote-to-close .

2
Three "Keep open"s and it still closes
7
Good question, but OP didn't know how to ask it?
7
Vote to close bounty question - example code
5
Should the "broken code" close reason be reworded?
8
What's the best way to change how my code looks?
28
Let's not close fixable posts without explanation
12
Are we voting to close too quickly?
10
Vote to close and unclear titles
29
Close-vote threshold lowered from five to three