The CRonicles: Story of a Stack

Something pretty cool was born earlier today. There was a chat discussion involving new reviewers reviewees, about the site's graduation and the History of Code Review.

Mat's Mug: people can read the whole story by following the beta-progress tag's timeline on meta, starting with this one.

The discussion had been dragging for a little while, some regulars were being a bit annoyed:

Vogel612: @Mat'sMug you really want to go through it all over?

Quill: either that, or take this to nth

Context: The Nth Monitor is where not quite on-topic conversations are to be had.

Zak: I also wouldn't mind a walk-through by people who went through it. I've pieced together most of it but never had it gone through all in one go.

So I went and created a new chatroom: CR Chronicles (transcript).

Did I just feel like writing? I don't know. But I always wanted to say this:

Mat's Mug: ok kids, sit in a circle, uncle Mug is going to tell a story

What followed was a narrative of the story behind this graph: 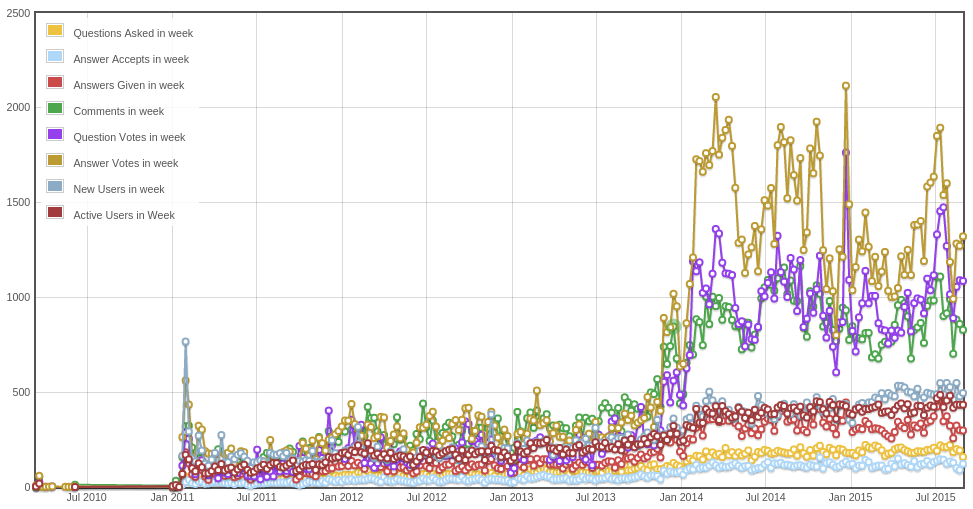 The story was told, the transcript will keep these meta-links together in one place and in context... but the story is still being written as I type these words, and as you read this post.

SE Chat chatrooms eventually freeze, and if nobody unfreezes them, the system eventually deletes them.

rolfl: I think this sort of officially means we are also the first beta site to get a history-channel.

What should we do with this chatroom?

We proved it, many things can happen in a relatively short period of time. Let's first rename this chatroom to The CRonicles, and then use it to conceal various meta-things:

But also, it makes a place for questions/discussions about CR's revival, The Mission, zombies, graduation, etc. to happen, without having to point newcomers "to meta" into a sea of meta Q&A's and no one to guide them. This isn't just meta - it's meta-meta. It's not a place to discuss the site rules and scope; it's a place to "bookmark" a spot in the timeline to link to the meta post that resulted in a change to site rules/scope. Notice the nuance?

Not the answer you're looking for? Browse other questions tagged discussion beta-progress chat meta .

48
How is Code Review doing right now?
9
Are Epic and Legendary badges obsolete?

48
How is Code Review doing right now?
9
What are the Stack Exchange limits on chatbots?
33
100 days later: what's up?
16
Post Mortems - Episode I: A new hope
42
Once upon a time in Stackland
8
How do comparative reviews ...compare to the rest of CR questions?
20
2015 Moderator Election Q&A - Questionnaire
14
Should votes to close a question as containing broken code be paired with a comment?
44
Putting down my mug
16
The context of "Lacks concrete context": let's fix it