How should we revisit our standard close reasons?

We have some history, shown below, with our close reasons, there are some problems we have with them. And there has been a consensus to rework them for a while now.

The latest I heard about this was in 200_success' message:

It's time to revisit our standard close reasons. The last initiative failed due to a poor process. I'll think about how to kick off the new discussion.

Since this was posted 2017-11-21, two months ago, I want to know if the moderators, and our community, have thought of ways to tackle the problems with our previous process.

The current close reasons are:

Below is a time line of changes, and requested changes, of the close reasons. They're listed below to make looking up information easier, and so users that haven't followed this before don't have to search meta to understand what's happened, and when.

If you're 10k you can see when the close reasons were changed. And is how I got some of the above dates.

And so we have the result:

As I see it, some of the problems with the existing close reasons are:

In summary, those misunderstandings sometimes cause posters to be frustrated or angry.

These three proposed reasons are largely based on the suggestions by Peilonrayz from the previous discussion.

Key improvements, relative to the current situation, are:

I mostly agree with 200_success' answer. However there is one close reason I think that should be moved - the no code reason. This is mostly for three reasons:

Just for context and additional information.

The current close-reasons have been used as in the following picture for the last 30 days: 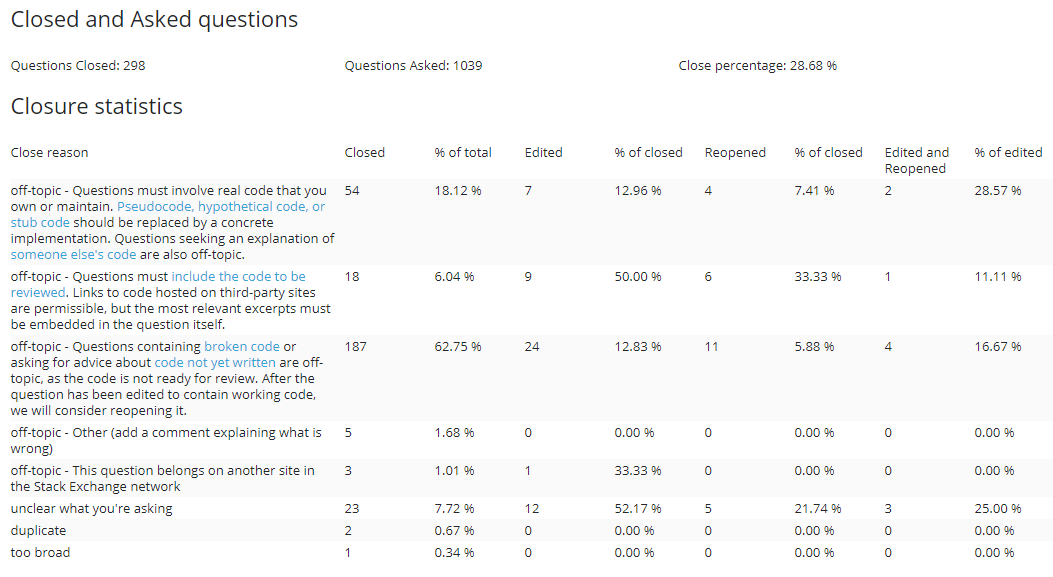 Almost 300 questions have been closed, which is not quite 30% of all questions asked.

The overwhelming majority (62%) of these questions are closed as "broken code / code not yet written". After that, there's not quite 20% closed as "Pseudocode / Seeking Explanation".

After that, it's "Unclear what you're asking" with ~7%, "Missing Code" with ~6% with Custom close-reasons and migrations each having 1%.

This is ranging farther afield than just "reword a reason", but I'll throw it out there.

As a reviewer, I would really like to encourage (or make mandatory) automated unit tests that exercise (a portion of) the reviewed code. Think fiddle. Anything the OP does which makes it easier for the reviewer to run the code is a Good Thing.

Soooo, if the "what are my options" FAQ, the "broken code" reason, and the original posting UI mentioned automated tests, and gently nudged OP in the direction of providing tests, that could improve submission quality. Which may bring down the high rate of off-topic posts. This could be phased in one language tag at a time by adding a "-with-test" tag. The site could offer OP immediate concrete feedback about adequacy of his testing, before involving a human reviewer.

Not the answer you're looking for? Browse other questions tagged discussion status-completed close-reasons .

38
My question was closed as being off-topic. What are my options?
30
2018 Moderator Election Q&A - Questionnaire
25
How should we revise the standard off-topic reasons, if we can have up to five?
16
The context of "Lacks concrete context": let's fix it
15
Is our "broken" wording broken?
18
Let's update the modal for new askers
11
Should we do away with "someone else's code" wording?
8
Revising list of closure reasons
10
Vote to close and unclear titles
13
Rewording close reason "Explanation of code"
See more linked questions

4
Custom Close Reason Post-Mortem
8
Close reasons and migrations (and stats?)
11
Should we do away with "someone else's code" wording?
5
Should the "broken code" close reason be reworded?
25
How should we revise the standard off-topic reasons, if we can have up to five?
22
If SO had a standard off-topic reason for code review requests, how should it be worded?
7
Insecure links in custom close reasons should be HTTPS
1
Why don't we have a close reason like "off-topic because of asking to find a 3rd party resource" like SO has? Or at least a "Blatantly off-topic"?
7
What's the best way to change how my code looks?