Would it be possible for Code Review to award bounties on good questions that have remained unanswered for more than 6 months? When I was working through zombies I found a few questions I couldn't answer but were good questions. Starting with the questions that received the most up votes and working down to questions with 5 or more up votes?

In cases where the user is no longer active on CR, moderators could accept the answer.

The point is that normal users generally won't see these questions and it might be good to bring them back into focus, so that someone can try to answer.

I think this would require a large cultural shift to get others to do this too. If you want to post a bounty then feel free to do so. I post bounties for questions every now and then, and I've seen others do the same. But these aren't at the magnitude you probably would want from this cause.

But are bounties really the best option?

What is the cause for all these zombies, and why aren't we focused on fixing that? To me it looks like this is an XY problem. I also feel focusing on zombie cleanup rather than prevention could promote the creation of new zombies. People have a limited amount of time and if they're sniping all the 6 month old zombies who will be answering the new questions?

Personally I don't answer zombies, not because they're bad. Some of them probably would be more fulfilling to answer, but because I'm incentivized by votes. What is the incentive for me to spend hours laboriously answering a question that no-one's going to see? Contrast this to sniping a low-hanging-fruit new post that people are going to up vote and get to HNQ.
I get so many of those up votes that I want for a fraction of the work. It's a clear no-brainer.

And so the only solution to get me to answer zombies seems to be only implementable by Stack Exchange. And I doubt that'll happen. (Say a hot zombie list)

If you want to nuke 1000 of the 6000 zombies we have you can do that by casting a single vote on a lot of answers. This only goes to prove that zombie farming is an unrewarding endeavor.

What's the source of all these zombies? A quick glance at one of the graphs in rolfl's recent post should be all we need to know what the biggest problem is python. 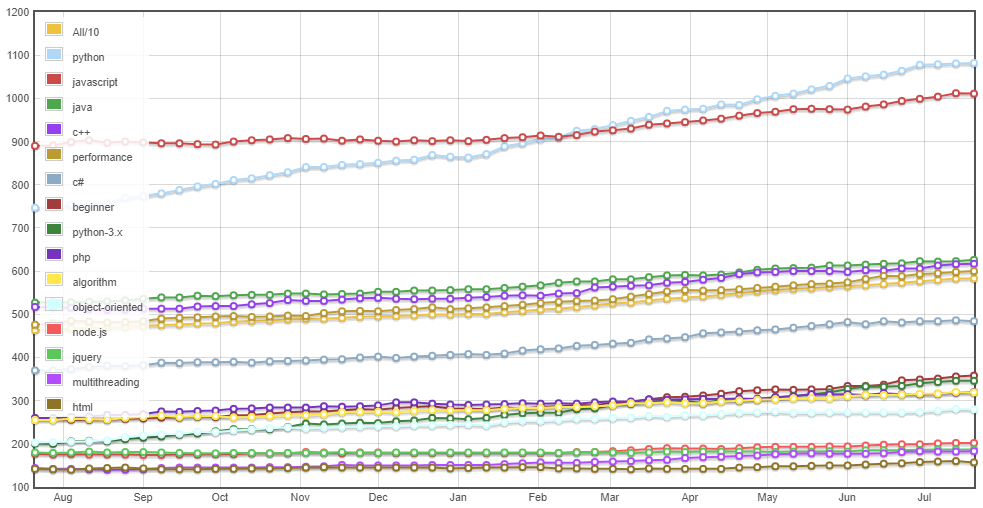 Before I look at Python, I'm going to look at some of the other tags. Take C# for example, here we can see that a lot of the top answerers have only a couple of handfuls of answers. To be in the top 10 for the past year you only need 20 answers. Given that the zombie count has gone up by 100 that means if we had 5 more benj2240's then it would have stayed in place. Alternately if dfhwze had joined in January then the zombie count wouldn't have stood a chance. And if either Henrik Hansen or dfhwze stop contributing the zombie count is likely to drastically increase. 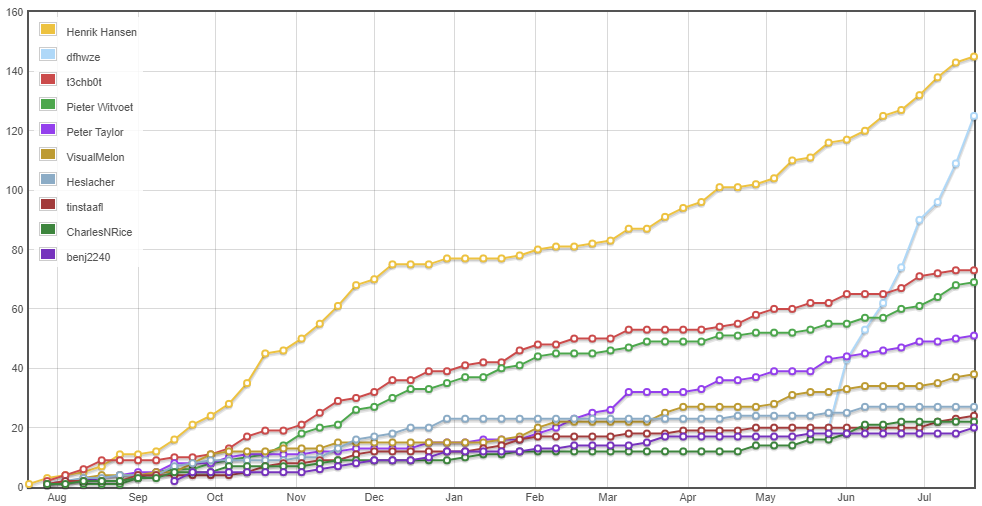 If we look at JavaScript we see similar situation as before, but it's even more extreme. The third highest answerer has 33 answers this year, with the tenth having 18 answers. This shows that JavaScript predominantly has low answer count users. Whilst the zombie horde is being held back by Blindman67 and Sᴀᴍ Onᴇᴌᴀ. 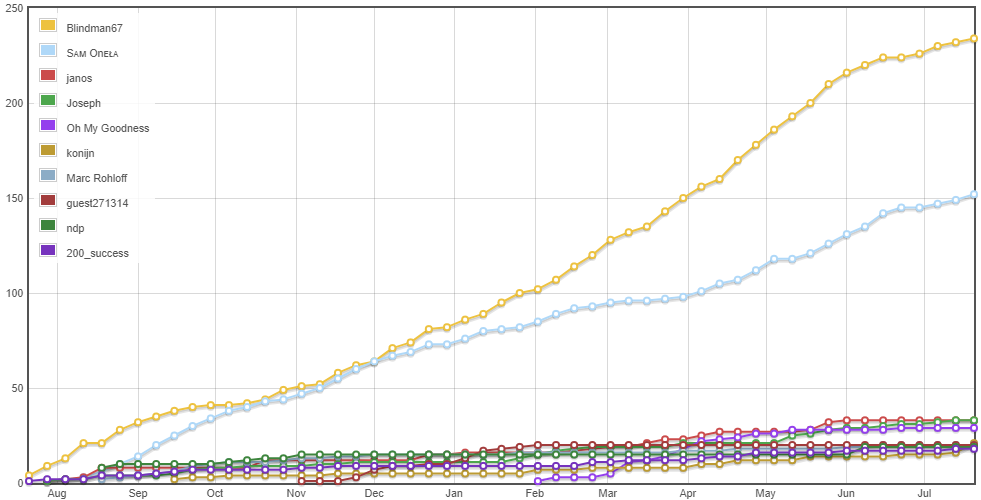 And so I think C# has fairly healthy user contributions, but JavaScript looks like it's very susceptible to being hit by a bus.

When making these graphs I half expected the Python one to look like the JavaScript graph, with Graipher and Mathias being at the top. However this isn't the case and shows what I think is healthy tag activity. If any of the top ten are hit by a bus then the answers will continue.

It's nice to see that the 10th most active user, l0b0, has provided more answers than the average of the top ten of C#, JavaScript and Java. Where C++ has a nice amount of active answerers, but also has a high bus factor.

Python also gained two new active contributors that got into the top 10 being Reinderien and AlexV. 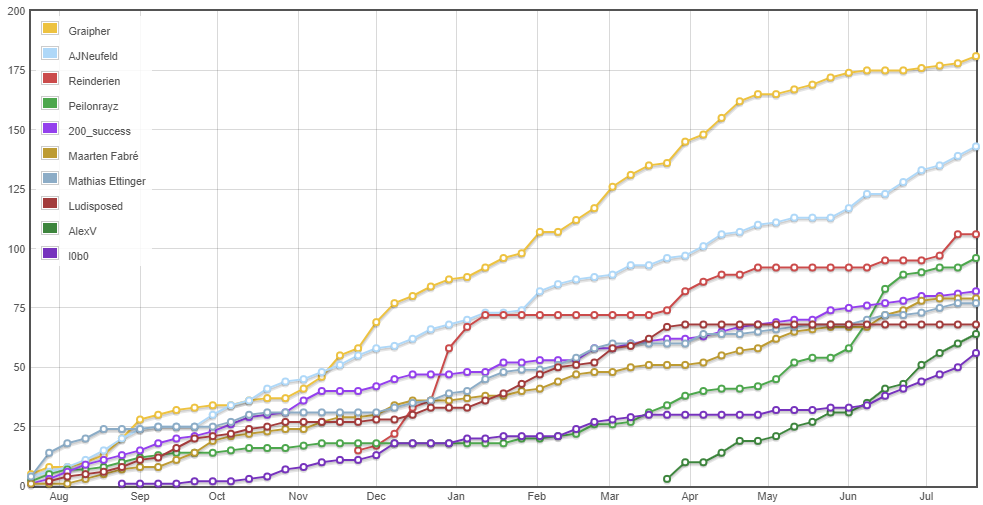 I don't think I'm a highly active answerer on Code Review in general, even more so this year. But I've contributed an average of 2 answers a week. Which would have been enough to hold back the zombies this year from any of the tags, except Python.

And so I think there's an active answerer shortage. I hope the graph showing so much Python activity, but still tons of zombies poping up is enough to prove that.

Taking another look at rolfl's post we can see some general stats for Code Review. Looking at the active users line we can see we've had the lowest amount of active users since just before 2014. 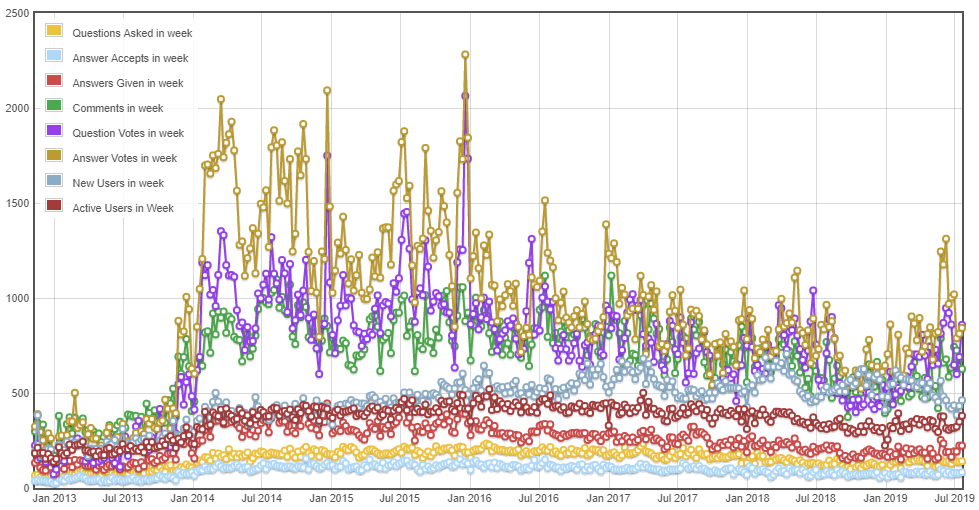 I don't know how to increase site activity. But I think the focus should be to get more answerers for now to stop the increase of zombies.

Later to help the number of zombies to go down we should incentivize answering them. The only non-rep exhaustive solution I can think of is a chat room/meta post/SEDE query that highlights new zombie kills. This should help reduce the amount of zombies that have answers but no upvoted ones too.

The point is that normal users generally won't see these questions and it might be good to bring them back into focus, so that someone can try to answer.

I support the idea of bounties on zombie questions, but for the opposite reason! :) I have [c++] in my favorite tags, and I typically look at the "unanswered questions" tab when looking for something to answer. So at least "Fluid Simulation with SDL", "Autotools detect C++ language standard support", and "Vergesort — A runs-adaptive layer to enhance sorting algorithms" are very familiar titles to me — I scroll past them every day! I wish someone would answer them so that they'd stop cluttering up my "feed" with the same months-old material every day.

I guess what would solve my peeve more effectively would be a "Hide" button — a way to say "I believe I'm never going to answer this particular unanswered question, so please never show it to me in this tab again (unless maybe there is activity on it)."

Not the answer you're looking for? Browse other questions tagged discussion feature-request unanswered-questions .