How to handle a VTC as duplicate that goes the wrong way around?

I encountered this review today, where a question was to be closed as duplicate of another, older question. However, the dupe target was closed, at -5 and unanswered. The quality was much lower than that of the question in the review queue itself.

What normally should've happened, is that the dupe target gets closed as duplicate of the question that was now in the queue. Except the older question was already closed before the newer question arrived, so it should probably just be removed.

How should we handle this as reviewers?

What I've done now is leave the question in the queue open. I can't flag/vote to close the other question as duplicate, since it's already closed. A custom flag is still a possibility of-course.

Should we simply leave the question in the queue be and flag the older question to be removed? That feels like the most appropriate action anyway. It's 10 days old, unanswered and closed, so it's a bit surprising it survived this long with that score.

I'm both interested in how this should've been handled and how we handle similar situations.

I would also recommend that the original question be deleted. If the original is deleted I will remove my duplicate vote.

I found the duplicate after I answered the question. I probably should have removed my answer.

This is an example of incorrect handling

This should not be behavior we want on Code Review.

This post which has been otherwise well received shouldn't be closed as a duplicate. And since the other question has already been closed nothing needed to happen here.

I think the origin of the idea that users are allowed to edit any off-topic post into shape comes from Mat's answer here. However I feel we've completely 180ed from the original sentiment.

And then the question collects its 5th close vote, and sits there collecting dust in a broken state, and OP can't salvage their post without invalidating the answer.

Every closed, deleted, downvoted question you ask takes you closer to an automatic question ban.

And the only way to recover from bad standing, is to edit and improve your existing posts.

How should this have been handled?

Every time I see people moderate content on our site it fills me with shame to be a part of Code Review. I see: (Yes I'm hijacking the answer a bit)

What I'm trying to get to is that I can't see why any OP would want to fix their post as in every way possible it seems we're trying not to help them and just want a medium to vent our frustrations away. But not only that if they still for some bizarre reason want to fix their posts then there is normally nothing of substance in the comments the OP can go off. Comments have now just devolved to an unironic "how to draw an owl" meme. 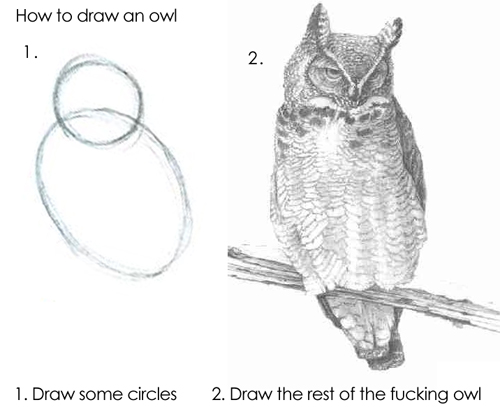 And now this masterpiece is just another checkbox to tick on ways Code Review has failed its users.

To me this is just another example of roboreviews. Surely someone should have actually thought about whether the question should be closed for a -5 target that's off-topic. And thought, "maybe this isn't a good idea".

And so we should stop having robots in our review queues.

Can we have the review queue tests that inhibit roboreviews added to Code Review?

How to handle the situation now

I say leave everything to be automagic. Now that this has the meta effect with added scrutiny I can't see the question getting any worse.

If the question is closed I'll hammer it open. If I don't see it, starting a reopen review, flagging for a moderator or pinging me to hammer it open should also minimize damage.

9
How do we train our self-moderators?
4
Preventing the ability to re-open off-topic questions by explaining how it's broken in an answer

4
Strange rule when voting to close as duplicate
9
Major bugs caught in questions
8
How do comparative reviews ...compare to the rest of CR questions?
13
Harmless duplicate or are we being taken advantage of?
8
Design-only answers?
7
Why was "Get minimum of four and maximum up to a limit" not reopened after the code was fixed?
12
Can you have an answer without any code in the question?
9
Why is "Building a good C++11 template library - compile-time checked enum array" on-topic?
5
Please reopen "PHP: Object for HTML hyperlink"