Could syntax highlighting be improved?

I noticed the syntax highlighting on CR was different than that on SO:

Syntax highlighting isn't perfect - the blue and the red could be a little brighter, but overall it's fairly representative of what we have in our IDE's and it's "good enough":

(oops just noticed I forgot the on keyword in my inner join stub...)

On CR however, everything we're used to see blue shows up in some kind of muddy brown that's reasonably hard to tell from the comment-gray, or even the string-red: 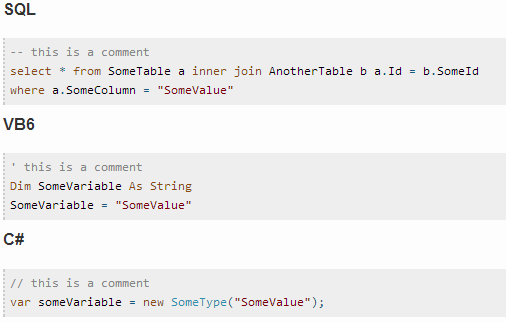 In VS2012 Express, without any customization, code is highlighted like this:

In SSMS2012 Express, without any customization, TSQL is highlighted like this: 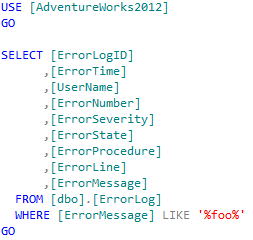 I think I made my point: I don't mind gray comments (although I don't see a reason why they shouldn't be showing up in green), but blue should be blue, and red could be a little bit brighter (SSMS2012 is a little bit intense, but somewhere between that and VS2012 would be perfect).

Inspecting the CSS with FireBug is quite interesting - it seems the color for the "kwd" class is intended to be #00008B (blue), but that gets overwritten by #8A4A0B (mud-brown), so fixing the colors is - as I thought - pretty easy; just by disabling the overwriting CSS rules and using #008B00 for comments, I get it to look like this: 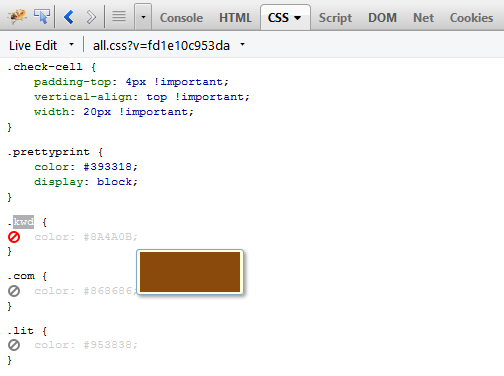 So the solution is essentially to remove the CSS rules that were added on top of the correct-looking ones. Come on guys, unless I missed something, effort is next to none here!

I agree with this, and in particular I find comments are hard to read — comments are just as important as code, but displaying them in grey on a grey background suggests that they are not important.

Good luck getting this improved, though: when I raised this issue previously I was told that it's my problem that I don't have perfect vision.

So what I do instead is to use the Stylish plug-in for Chrome, which allows me to apply a custom stylesheet to any website. For Stack Overflow I have, for example:

Not the answer you're looking for? Browse other questions tagged feature-request syntax-highlighting .